02 Jun What can you do with a piece of charcoal? 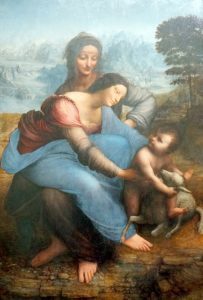 I’ve seen it before.  I’ve seen it a number of times actually.  It hangs on the wall at London’s National Gallery and if you’re in the right mood, it can take your breath away.  As it does for me, always.

Called a ‘cartoon’, the technique is a preparatory study for the real artwork, a painting, a sculpture or other piece.  Usually, cartoons are pricked or incised around the outline to allow for a template transfer or similar for the intended end-state artwork.

In the case of da Vinci’s The Burlington House Cartoon (The Virgin and Child with Saint Anne and the Young Saint John the Baptist), there are no obvious pricks or incisions and the cartoon is not quite complete around the figure outlines.  However, it is assumed the cartoon is a preparatory work for the stunning and much-celebrated “Virgin and Child with Saint Anne” (c. 1503) that is displayed in the Louvre.

For the cartoon, da Vinci used a piece of paper, a piece of charcoal and a piece of chalk.  This article is not intended to explore his materials, only to make the point that they were austere.  My experience when I see this cartoon is “wow! This was prepared from, and with, nothing! Why can’t I do this?”.  I’m wrong, of course.  Leonardo da Vinci was not only a brilliant artist and engineer, but he was also a meticulous, talented and relentless planner.  The later are characteristics of a successful person, regardless of your skills.

In business terms, da Vinci’s cartoon was a planning document for a major project.  The cartoon would have taken months to prepare, before approval to move on to the commissioned artwork.  His client (history is unclear who this is, only acknowledging this was a commission for someone) would have been involved in all the steps.  As the key stakeholder, the commissioning client would have given some guidance and approved every step.  Da Vinci had to manage expectations and deliver before he was paid.  It’s the same for any project manager in the 21st century.

So, I think to myself, “what can I do with a piece of charcoal?”.

When I look at this cartoon in the gallery, I am taken aback by the depth and feeling it invokes in me. I am moved.  Strange, for someone not easily moved by art.  This time, having 10 days working and thinking outside my normal environment 20,000km away, I approach my reflection differently.

It’s not about copying the technique or even doing your planning in charcoal.  It’s more simply about getting your ideas out.  Squeezing them out in any way that works for you and making a start on something big.  For some, it is visual art.  For others, it’s music, writing, acting or process mapping.

Leonardo da Vinci’s intention was to get his idea out, then check with his client before the actual project commenced. In his planning, Da Vinci expressed himself in a beautiful way.  But this is not the case for everyone. Planning doesn’t need to be perfect, but it certainly needs to be considered.

There are dozens of ways to express yourself.  You just have to work out what works for you and this might be different from message to message.

I love art, music, theatre, food, wine and comedy.  I love them all, but I’m not skilled in expressing my thoughts or ideas in any of these ways.  What I’ve realised is that it doesn’t matter.  Find your charcoal and you’ll get stuff done.

Certainly, Leonardo da Vinci’s cartoon is not the earliest example of project planning, but it’s a pretty good one for 500 years ago with limited technology.  Da Vinci didn’t have Slack or Trello.  He didn’t even have Microsoft Paint.

Leonardo da Vinci – the artist and engineer – for all his frustrations and challenges, was a professional and an entrepreneur.  His codex notebooks are legendary and I wish I owned one.  But, what he demonstrates to us, n the form of his cartoon, is the value of planning.  His clients would commission the work and he’d have somewhat free reign.  In every case, he planned.  He made studies, prepared cartoons and meticulous drawings, theory tests and made sure these were perfect before commencing the “real” work.  If you know anything about Leonardo da Vinci, you will know he was a selfish, cantankerous loner with an incredible understanding of science and beauty and more ideas than most.  Yes, he was an entrepreneur, even though that word didn’t exist 500 years ago.

Leonardo da Vinci is, of course, a Master.  A legend and more celebrated and respected now than he was when he was alive.  He was not lazy.  He had courage.  He did not cut corners.  He planned and he succeeded.  Not every time, but more often than most.

So, what can you do with a piece of charcoal?  If you’re like me, you’ll make a mess. But, if you think metaphorically, you can create a legacy, be a legend or, at the very least, succeed in your projects. Every time.

My charcoal is a keyboard or a project management or process mapping tool.  This is where I’m able to plan and where I can create an enduring legacy. I’ll go to a gallery if I want to be moved or need inspiration.

What is your charcoal?